Is an IBM Z server really too big for your business?

The IBM Z follows a long line of industry-leading enterprise servers that were first introduced in April 1964. Ever since then, it has maintained its position as the Gold Standard in enterprise computing. IBM Z has been known by many names across its 55-year heritage, including zSystem, zSeries, ES9000, S/390, S/370 and S/360. The most commonly referenced term, however, is “mainframe”.

These servers are one big family with a long history, which represents the pinnacle of IBM server technology. Investment protection was one of the key design philosophies of the platform and it is what differentiates this platform from the rest. Applications developed for the early-generation mainframes can technically still run on the latest generation IBM Z servers. This ensures that customer’s investment is protected and enables them to update their infrastructure without having to rewrite their applications.

Throughout this long history, Z has been the platform of choice of many of the world’s biggest and most innovative companies. Yet many businesses shy away from Z and mainframe computing in general.

It’s not hard to imagine why. Because IBM Z is the choice of the largest Fortune 500 companies, smaller organizations may assume they cannot afford it, or would not gain value from its extreme capacity and power.

But is that really true?

By taking a closer look at what IBM Z offers, and those who are leveraging the platform, we’re going to help you decide for yourself. 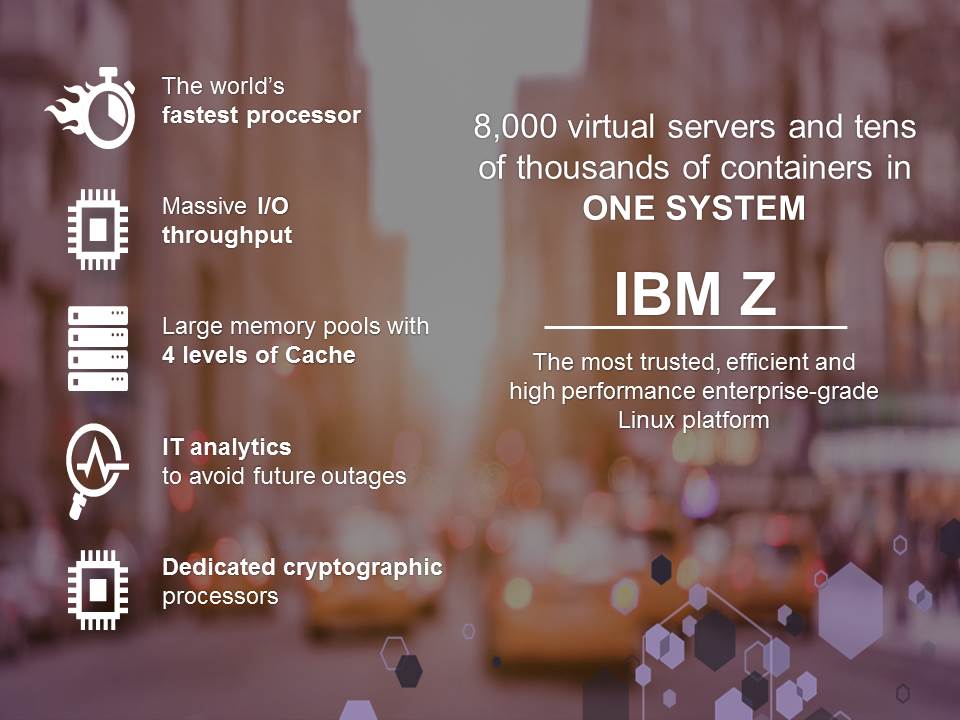 “Mainframe computer” is an imposing term, but it’s not really a technical one. It just means the biggest servers available for mission critical applications.

IBM’s other flagship server platform, the IBM Power Systems run on the IBM POWER family of processors, which are themselves extremely powerful. But Z has its own unique “z/Architecture”, with a complex of central processors that can process billions of encrypted data transactions per day. This provides an entirely different level of performance, on a server platform that meets the largest business-critical and mission-critical requirements.

Security is a key element of the IBM Z platform. On Z, all of a business’s data is secured by pervasive on-board encryption processors – whether the data is being stored or processes. This security focus makes sense, given that over 90% of the world’s biggest banks use IBM Z. For those who need the most secure transactions, such as banks, Z makes the enterprise and its customers bullet proof.

Perhaps most impressively, Z delivers record uptime – 100% in many deployments. It’s not difficult to find stories of IBM mainframes that have run continuously for 20-30 years, thanks to their extremely rugged hardware and software engineering. For businesses that need always-on services and workloads, that is extremely useful.

Who is using IBM Z?

So, who is benefiting from this remarkable performance? Is it just for the biggest companies? Or can smaller organizations get on board too?

Well, this is certainly an important system for businesses that need to compete at the highest level. Z is leveraged by:

Yet IBM Z is a family of systems – the z14 is the big one, but you can also start small with the smaller single frame z14 Model ZR1. With 30 processor cores packed into a single 19-inch rack frame, ZR1 model allows all kinds of business to adopt IBM Z. You can even use it to improve cost-efficiency, if that is the goal.

There are lots of examples of small and mid-sized organizations using Z, with the following being just a sample.

NCFB’s head of technical services sums up the appeal for growing companies: “With the IBM z14 ZR1, we can take on more customers and still offer the same great levels of service. It’s easy to expand the IBM Z environment as and when we want, giving us the flexibility to act fast on growth opportunities,” he says.

Hybrid cloud that’s ahead of the game

Hybrid cloud is another top priority for businesses of all sizes, and again IBM Z is a leader not just in performance but in efficiency.

Z is designed for hybrid cloud, with features that solve the biggest cloud challenges like:

Why total cost of ownership is lower with Z

When you’re choosing a server, it can be extremely helpful to look not just at the cost of acquisition but the total cost of ownership (TCO). That is, how much it will cost your business to buy, run and maintain over its lifespan.

TCO is the true cost of a server to your business – and in many cases, IBM Z costs businesses less than deploying Intel-based servers but with better performance.

Two cost-saving scenarios are server consolidation and database consolidation. Because IBM Z mainframes are so powerful, they can do the work of many smaller servers. If you consolidate many servers’ workloads and databases on one Z server, you only have one server to buy, power and maintain – and you also have the incredible security and reliability of an IBM mainframe.

Independent analysis finds that IT consolidation with the IBM Z family:

It’s quite remarkable how much value IBM Z offers. Yet as we said earlier, many businesses never investigate Z because they assume it’s only for the very biggest companies.

Are you intrigued about IBM Z?

I hope this post has shown that IBM Z can be for everyone – and sparked some curiosity about what it could do for your organization.

At GBM, we design, deploy and support end-to-end solutions based on technologies from our long-time partners IBM. If you have ambitious goals, then we can help you achieve them with Z, or whichever solution is best for your business.

If you would like to discuss your goals and learn even more about IBM Z, please feel free to contact me directly at sreehari@gbmme.com